Popular
The best job in the world: Dietitian for...
Stimulus Check Live Updates: Latest on reductions in...
Does skipping breakfast increase the risk of an...
Fed Poly Bauchi sacks 2 lecturers for alleged...
How private basketball prep schools in Colorado are...
Beet Hummus
Low Covid-19 Vaccine Uptake Worries Kisumu, Homa Bay...
13 Fanboy (Movie Review)
What to Read When You Want to Learn...
An open letter to Sally Rooney
Home Running WRC – Neuville seals 2nd win in Spain as title fights go down to the wire
Running 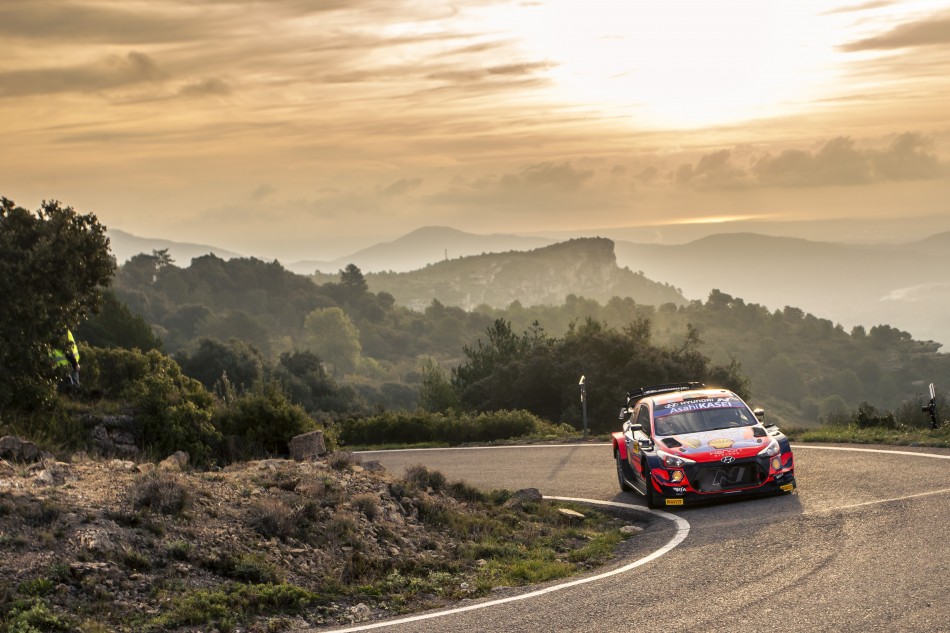 Thierry Neuville, navigated by Martijn Wydaeghe, stormed to his second FIA World Rally Championship victory of the season with a commanding success at RallyRACC – Rally de España on Sunday afternoon.

The Belgian took control of the penultimate round with eight straight fastest times in his Hyundai i20 across the middle of the three-day asphalt rally to secure back-to-back Spain victories by 24.1 sec.

Second place for Elfyn Evans in a Toyota Yaris means the fight for the drivers’ title goes to a final round decider in Italy next month. He headed Dani Sordo’s i20 by 11.2sec and trails team-mate Sébastien Ogier by 17 points. A maximum 30 remain available.

After demoting Evans from the lead on Saturday morning, Neuville’s progress at the front was serene until a big scare ahead of the closing Wolf Power Stage.

A starter motor problem meant co-driver Wydaeghe pushed their i20 into the regroup before the stage. The crew managed to restart the car and tackled the test without further problems, but the incident clearly rattled Neuville.

Evans felt uncomfortable on dirty roads when the smooth asphalt speed tests in the Costa Daurada hills were tackled for a second time, but the Welshman has slashed the deficit to Ogier from 44 points with victory in Finland earlier this month and second here.

He tried a variety of set-up changes to no avail but had enough pace to stay ahead of a charging Sordo, who won all four of Sunday’s special stages to demote Ogier and claim the final podium place.

Ogier, pursuing his eighth title in nine seasons, struggled for pace in the first half of the rally. While set-up changes gave the Frenchman fresh heart, he could not hold off the Spaniard.

Neuville and Sordo’s 1-2 in the bonus points-paying Power Stage means the fight between leader Toyota Gazoo Racing and Hyundai Motorsport for the manufacturers’ crown will also go to the last round.

Kalle Rovanperä finished fifth in another Yaris, almost 50sec adrift of Ogier, with Gus Greensmith overcoming several problems to complete the top six in a Ford Fiesta at the final rally for co-driver Chris Patterson.

Oliver Solberg celebrated his first WRC asphalt drive in an i20 World Rally Car with seventh, equalling his career-best result, and top-tier debutant Nil Solans was eighth in another i20.

In FIA WRC2, Frenchman Eric Camilli claimed the class glory, whilst Andreas Mikkelsen wrapped up the drivers’ title without even starting the event.

Camilli moved into the lead on SS2 after an early battle with title-chaser Mads Østberg’s similar Citroën C3 Rally2 entered by TRT. A puncture for Østberg on Friday gifted Camilli the chance to stretch his legs and he steadily increased his advantage over the remaining two days.

Whilst Camilli won the rally, results elsewhere meant the absent Mikkelsen was crowned the drivers’ champion. The Norwegian had planned to end his season at FORUM8 ACI Rally Monza next month, but as neither Østberg nor Teemu Suninen scored enough points to catch him, the title was decided earlier than anticipated.

Finland’s Emil Lindholm rounded out the perfect weekend by taking the win in FIA WRC3.

The 14.9sec advantage he opened up on Friday had more than doubled by close of play on Saturday and a clean run over the final four speed tests confirmed his win by 28.5sec from Kajetan Kajetanowicz.

Kajetanowicz moved into the championship lead with one rally to go, however, his main rival Yohan Rossel is still awaiting news regarding an appeal over his EKO Acropolis exclusion. The hearing is scheduled to take place before the season-closing FORUM8 ACI Rally Monza next month.

The title-deciding final round at FORUM8 ACI Rally Monza will take place on 18 – 21 November.

The final unofficial results can be consulted here.

WRC – T. Neuville: “The difference was a set-up change on Friday midday”

WRC – Neuville on top in Spain after...