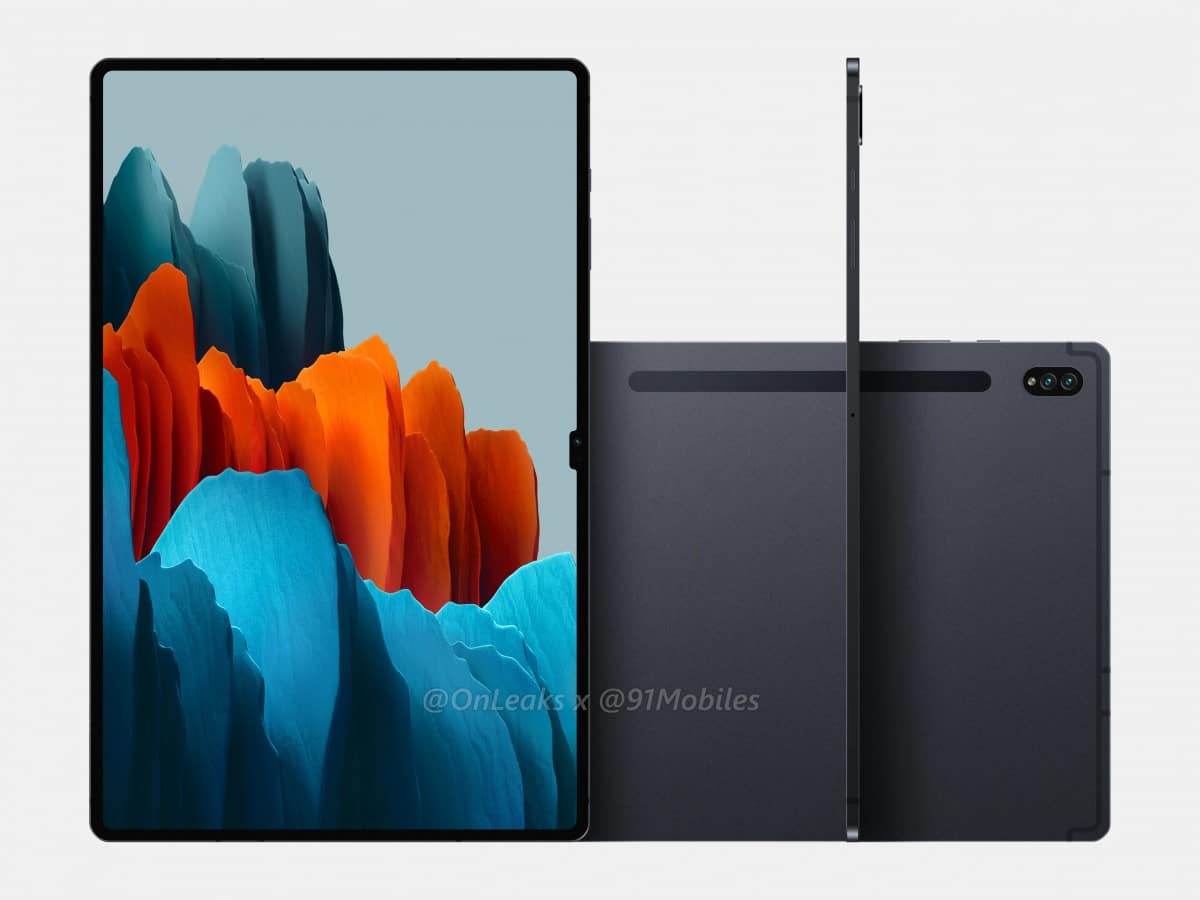 A new render purported to be that of the Samsung Galaxy Tab S8 Ultra has appeared online and provides a good glimpse of what the final thing could be like. The render courtesy of leakster OnLeaks and 91Mobiles reveals a nice looking tablet though the one thing that will make it special is the presence of a notch at the top. That would be akin to the one that the MacBook Pro is set to come with and is the first time the notched display is making its way to the tablet segment.

Otherwise, the Galaxy Tab S8 Ultra is shown to come with slim bezels on all sides which looks really nice but can prove to be troublesome during hand-held operations. There are very chances of an inadvertent touch interfering with the normal operations though a tablet that big is likely to be used more on the desk than on the hand.

The display measures 14.6-inches which is quite massive for a consumer grade tablet device. Also, it’s going to be an OLED panel having a resolution of 2,960 x 1,848 pixels and a 120 Hz refresh rate. On the other side of it lies a Snapdragon 898 SoC paired to either 8 GB or 12 GB of RAM along with 128 GB and 512 GB of storage respectively.

Meanwhile, on the right side is placed the power button together with the volume rocker buttons. There is a USB-C port placed along the bottom and is flanked by two speaker grills on either side. There are two more speaker slots provided at the top and act to provide surround sound experience in landscape mode. The 3.5 mm headphone slot is missing though.

Moving over to the rear and there is the dual camera – 13 MP + 5 MP – a setup that catches the attention right away. Alongside is the magnetic strip that acts to charge the S Pen. Antenna lines too are visible on the rear. Further, while the render reveals a single camera sitting within the front notch, sources claim there could be a twin camera system – 8 MP + 5 MP – on the front on the final production version.

Further, it’s a massive 12,000 mAh battery that is said to be powering the entire thing having 45 W fast charging support. However, it remains to be seen if the 45W charger would be accompanying the deice or if it will need to be procured separately.

Samsung is rumored to be readying the new Galaxy Tab S8 range comprising of the base S8, S8+, and the S8 Ultra for launch early next year. That is also going to be the time when the S22 flagship smartphone is set to launch as well.

With a keen interest in tech, I make it a point to keep myself updated on the latest developments in the world of technology and gadgets. That includes smartphones or tablet devices but stretches to even AI and self-driven automobiles as well, the latter being my latest fad. Besides writing, I like watching videos, reading, listening to music, or experimenting with different recipes. Motion picture is another aspect that interests me a lot and maybe I’ll make a film sometime in the future.

The best job in the world: Dietitian for...

Does skipping breakfast increase the risk of an...

How private basketball prep schools in Colorado are...

Add These 3 Nutrients To Your Diet For...

Mature Hairline: Causes of a Receding Hairline in...