PLOT: A crazed fan stalks and slashes actors who were in Friday the 13th movies.

REVIEW: 13 Fanboy (watch it HERE) is a movie aimed directly at fans of the Friday the 13th franchise, and I count myself among those fans – Friday the 13th is my favorite horror franchise and Jason Voorhees is my favorite icon. Since the official franchise hasn’t had a new entry in over a decade due to various problems, most famously the legal battle over the original film’s U.S. copyright, it’s nice to get something other than a fan film to watch for a change. The more familiar you are with the Friday the 13th movies, the more appreciation you have for them, the more you’ll get out of watching 13 Fanboy.

The film was directed by Deborah Voorhees, best known for playing Tina in Friday the 13th: A New Beginning (there’s even a song about her role in that movie), who also wrote the screenplay with Joel Paul Reisig. Voorhees recruited several of her fellow Friday the 13th alumni to play major roles in the movie, which is why it’s so much fun for an F13 fan to watch. There are Jasons in the cast, there are survivors, and there are multiple victims. Everyone is playing a version of themselves… except for Corey Feldman. Instead of playing Corey Feldman, he plays a creepy, potentially homicidal producer named Mike Merryman. Casual fans could still be entertained by all of this, and if you’re not the sort of viewer who will recognize these people on sight the movie does help you out by putting the actors’ names and what role they played in which Friday the 13th movie on the screen when most of them make their first appearance, but of course it’s even better if the movies they were in and the roles they played in them mean so much to you that you’ll be smiling as soon as they show up.

Voorhees takes these beloved actors and puts them in grave danger, starting off with herself. In an opening scene set 13 years in the past, Deborah Voorhees is murdered by a masked stalker. Now in present day, that same killer is widening their focus to target not just Friday the 13th veterans but also genre icon Dee Wallace and Voorhees’ fictional granddaughter Kelsie, who is played by Hayley Greenbauer and has become a horror movie star herself. She’s also an MMA fighter. Wallace and Greenbauer are both lead heroines, which is the norm for Wallace but presents a challenge to Greenbauer: as a horror newcomer, can she carry a movie where she’s surrounded by actors we’ve been fans of for decades? Well, she rose to the challenge and did a good job of making Kelsie an interesting, capable heroine.

While some of the F13 stars only have quick cameos, others are really given a chance to shine. Judie Aronson and C.J. Graham are convention buddies with Kelsie and Dee, so we see a good amount of them. Kane Hodder gets a surprisingly emotional scene. Ron Sloan, Junior from A New Beginning, has quite a prominent role in this alternate reality where he was married to Dee Wallace and had a family with her. Tracie Savage’s appearance went places I didn’t expect. And Feldman is amusing with his goofball performance.

13 Fanboy has its issues. Sometimes I questioned the logic – like when characters think a dangerous stalker is at their ranch, why do they run off into the woods instead of trying to escape in a vehicle, or at least on a horse? There was a scene involving Kane Hodder sitting in his car while talking to his New Blood co-star Jennifer Banko on the phone that had me a bit confused for a while. There’s even an error in those on-screen credits, as we’re told Dee Wallace was in Halloween II. She was in Rob Zombie’s first Halloween, not the second one. Some may be put off by the low budget as well, but that wasn’t a problem for me. I watch movies that had a lot less money to work with than this did.

Overall, I felt that 13 Fanboy was a decent slasher that definitely earned extra goodwill from me due to the fact that it’s populated with Friday the 13th stars. I don’t generally like it when actors play themselves in something like this (for example, when Seed of Chucky had Jennifer Tilly and Redman as themselves, I wasn’t into it), but this was a special case. It’s a celebration of the Friday the 13th franchise while also being its own separate thing, and it was sort of heartwarming to see all these F13 actors again, together in one place. Heartwarming right up until the “fanboy” made a bloody mess of them.

BMG-Global’s new genre division is giving 13 Fanboy a theatrical and On Demand release on October 22nd. 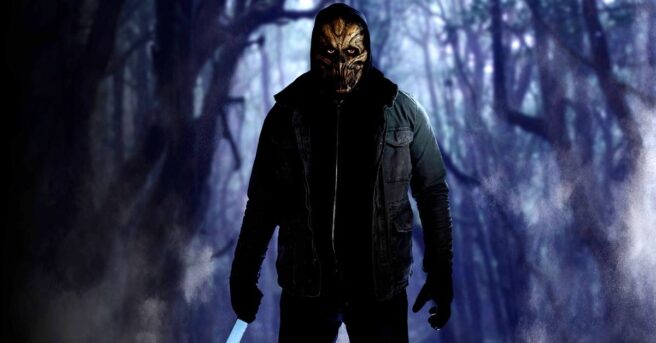 What to Read When You Want to Learn about Art