Washington Wizards players were unhappy with the latest fan incident that occurred Monday night at the Capital One Arena during their Game 4 win over the Philadelphia 76ers.

The fan got onto the court in the third quarter. The man was tackled and restrained by security as 76ers center Dwight Howard looked on. The fan was escorted out and the team said it would pursue charges.

Wizards center Robin Lopez said it was “wild” to see all the odd behavior.

“You can tell those people have been in some sort of captivity for the last year, year and change, right?” Lopez said. “It’s kind of wild to see the liberties people are taking.”

Russell Westbrook was the target of fan mistreatment earlier in the series in Philadelphia. He had popcorn dumped on his head while heading back to the locker room. It was the first of about four incidents during the playoffs.

WIZARDS’ SCOTT BROOKS SENDS MESSAGE TO ‘SOME’ FANS AFTER LATEST INCIDENT: ‘WE DON’T NEED YOU’

“The stuff that’s been happening over the last week — we all know that fans shouldn’t be doing that stuff. That shouldn’t happen during the game,” Beal said. “Just sit there and enjoy the game or stay home and watch it on TV. We’re fortunate nobody got hurt.” 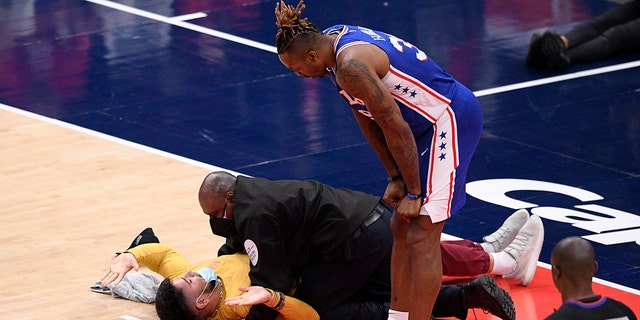 Philadelphia 76ers center Dwight Howard (39) watches as a fan who ran onto the court is restrained by security personnel during the second half of Game 4 in a first-round NBA basketball playoff series against the Washington Wizards, Monday, May 31, 2021, in Washington. (AP Photo/Nick Wass)

Wizards forward Rui Hachimura was unsure what the fan was trying to do this time.

“I think they’re just excited to come back. But they’ve got to be more respectful of us as players. They think they can do whatever they want,” he said.

The Associated Press contributed to this report.